Skip to content
Pediatric Craniosacral therapy (CST) is a gentle, hands on bodywork modality that can be used to address a large variety of pediatric growth and development disorders that present very early in infancy. CST for infants should be considered for all breastfeeding and nursing problems, GI distress and extreme colic such as chronic constipation, which can be caused by poor gastric motility, and any hint of lax motor reflexes or delayed growth and development.
The tenth cranial nerve connects the brain to the entire GI tract and its name describes the wandering path this nerve takes from the cranium to the gut. In Latin Vagus means ‘wanderer’. A 6 month old infant sitting straight up with their heart open to the world and an engaging smile locked on a person is demonstrating the physical and emotional hallmarks of good vagal tone. 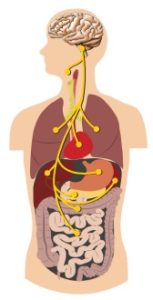 Also known as the pneumo-gastric nerve for its role in parasympathetic (unconscious) control of the heart, lungs and digestive tract, the vagus nerve connects the ‘gut-brain’ to the mind brain. It is the main thoroughfare for the mysterious autonomic nervous system, acting as a switchboard for our most vital physical and spiritual functions.
Trauma to the vagus nerve through the birth process and passage through the birth canal can result in impingement at the point where the nerve emerges from the base of the skull.
Beyond physical blockage of the vagus nerve, infants born from prenatally depressed mothers (and prenatally angry and anxious mothers) are more likely to have infants who show low vagal activity (link below to the study published in the journal Infant Behavior and Development). This study and others highlight the relationship between a mothers mental state during gestation and her babies vagal tone and social behaviors such as attentiveness, facial expressions and vocalizations.
Doctors measure nerve activity by looking at muscle tone, diminished nerve activity may be visible for its impacts on muscles, such as a drooping eye lid and poor facial tone on one side only like you see in stroke or Bell’s Palsy. An infant with low vagal tone nerve may have no outward physical signs, the problem may show as constipation, not ‘hitting milestones’, poor eye contact and other very early signs of autism.
Pediatric CST offers a powerful therapy that infants respond well to; it is a therapy that respects the bodies innate healing mechanism and desire to move toward balance and homeostasis. An infant CST session may last only 10-15 minutes and occur while the infant is breastfeeding or napping in moms or docs arms. Positive signs include euphoric burblings, bubble blowing, cooing. Releases are accompanied by toe wriggling and frequently infants will move to a ‘Still Point”, a hallmark of CST treatment and philosophy.
A Still Point in CST is a resting point for the nervous system, it is a reset where all aspects of the nervous system (conscious and unconscious) come to a resting point, a moment of balance and silence. The still point induces deep relaxation to calm the nervous system.
In my 18+ years doing CST, I have found parents of infants and children receiving CST report improvements in their child’s sleep, demeanor and gastric motility. CST for autism, when applied in a consistent manner together with 360-degree holistic lifestyle interventions, improves eye contact, reduces ‘stim’ behavior such as flapping, and results in better sleep and self-control.
Naturopathic Doctors versed in pediatric CST offer a powerful treatment tool for the constellation of diseases and development stunting associated with poor vagal tone in infants.
CST combined with naturopathic interventions to improve GI health, preserve the breastfeeding relationship and heal pregnancy and birth trauma experienced by both MOM and baby can result in marked improvement for everyone in the family.
I offer families the opportunity to speak with me by phone for 10-15 minutes to see if CST and other naturopathic medical treatments are right for your child. If you are concerned about any aspects of your infant’s growth and development, you should address them right away to your ND and/or pediatrician.
If you want to set a time to talk, please email me directly: drmurphy(at)natmedworks(dot)com
https://www.ncbi.nlm.nih.gov/pmc/articles/PMC2556849/

This site uses Akismet to reduce spam. Learn how your comment data is processed.